University Blues mourn the passing of Paul “Reg” Hickey on Sep 23 after a difficult battle with cancer.
Paul was a regular senior player through the ‘70’s and his dashes from the back pocket set up many attacking opportunities for his team mates down the ground. “Reg” was vice captain of the senior team and MUFC intervarsity captain in 1974. 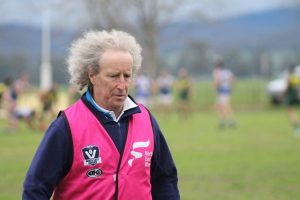 The Hickey family played a big part in the club through the 70’s and early 80’s with Paul’s parents
Carmel and Brian (deceased) regular supporters at Blues games, and Paul’s younger brothers Michael and Greg also decorated Blues players.
Our hearts go out to Paul’s family. Rest in peace.