The Number 12 at Uni Blues

Many of you are probably wondering why the Uni Blues Captain wears the Number 12 jumper. The tradition started exactly 40 years ago.
Chris Brown was the youngest Blues player ever to be appointed to the captaincy in 1978 and he took the team into the A grade finals eventually finishing third. A few weeks after the end of the season Chris was tragically killed in a motor bike accident.
To commemorate the memory of Chris, the Blues created a new trophy for the Best Team Man to be called the Chris Brown Trophy, and to this day, this trophy is the most coveted award presented by the Blues. In addition it was also decided that the captain would, from that time on, always wear Chris’ the number 12 jumper. Michael Yeo was the first captain to wear the number 12 in 1979, and the Blues subsequently made the Grand Final. 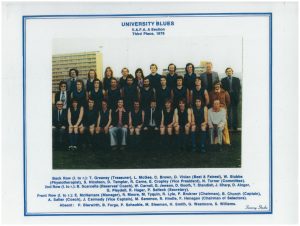 Chris Brown joined the Blues from Melbourne Grammar in 1975 and was a key figure in the Juniors’ Premiership that year winning the Juniors’ Best and Fairest. The following year, Chris had an outstanding year playing in the centre in a young exciting Blues team that had just come up from B grade and made the finals in their first year back in A Grade. (Chris is third from the left in the back row).
In 1977, Chris went traveling  and worked (and played footy) in thew Pilbara region of Western Australia, and true to form, he proved to be a very hand player.
In 1978, he made his way back to to Melbourne, and despite his youth (he had just turned 21) and the fact that he had been away for a year, he was a popular choice as captain. Chris had an outstanding year for the Blues winning the B&F and wore the Big V. 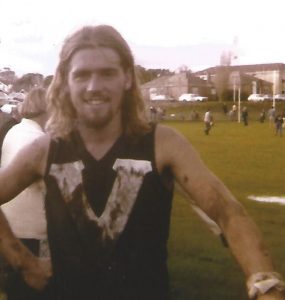 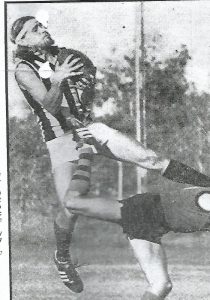 In the team photo of the 1978, Chris front and centre. (You might also recognise a couple of current Blues stalwarts in the photo). 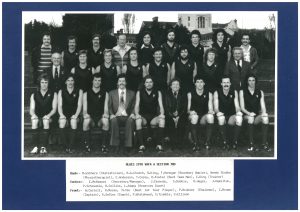 The traditions of awarding the Chris Brown trophy and the captain wearing the Number 12 have continued now for 40 years. More recently the Blues favourite wine from 1996 B&F winner (and subsequent Hawthorn captain) Richie Vandenberg’s vineyard has also been designated Number 12.
The club lost touch with Chris’ family until a couple of years ago when by chance Phef met Chris’ sister Ali. It turned out that Chris’ mother was still alive, but the family had no idea that the Number 12 traditions were still being maintained at Blues. 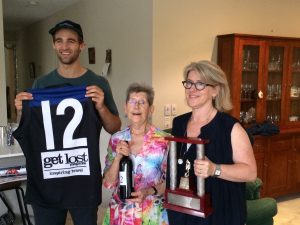 So we arranged for the then wearer of the Number 12, Vicko, along with Phef, Bobby and Brukie to meet the Browns one Sunday afternoon. It was a wonderful occasion and the Browns were thrilled to see the trophy, the wine and the Number 12.
So that’s why the Blues captain wears Number 12.
Ayce Cordy becomes the 18th Blues captain to wear the Number 12 in the 40 years since Chris’ death. We have no doubt he will do it proud just like his 17 predecessors. We look forward to seeing the Blues Number 12 standing on the podium after the Grand Final this September.