Poncast goes all the way

What started as a crazy idea between a few of the Uni Blues players has gone all the way to the top at the VAFA Annual Media Awards.
Hamish “Hammer” MacInnes, Ryan Walker, Connor “Conrad” Lappin and Tom “Funky” Williams had the idea to have a weekly chat show among themselves and with various members of the Blues Community dropping in for some deep and meaningful nonsense.
With the assistance of the Melbourne Uni’s sound studio and also calling on RSN on the occasions that the Uni studio was not available, the boys put together a fantastic show where pretty much nothing was off limits and fun was the main agenda.
On Thursday, the VAFA held their Annual Media Awards and in the Best use of Social Media (Series) category the Poncast was a stand out and a clear winner. 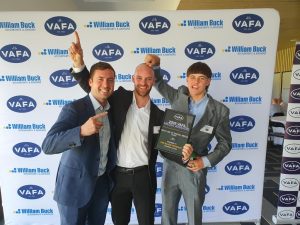 In typical fashion, the boys have celebrated long and hard.
A special vote of thanks must go to Sugar for his naming of the Poncast… a slight slip of the tongue which contributed to the aura of the show.
Congratulations to the boys on a mighty job, and If you haven’t caught up with the Award Winning Poncast, you can catch it at https://funketown.podbean.com/