Congratulations to Peter Summers on reaching the 100 Game milestone with University Blues. 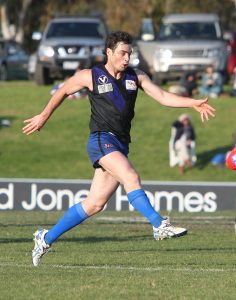 Pete has been an inspiring leader to our younger group of players leading the way on preparation and also those “little things” during training and matches that are needed to play the best football possible.
Following a stellar junior career which saw Pete rookie drafted to Essendon in 2004. he made his way to Sandringham VFL where he was the Captain and a Best and Fairest winner in 2007. Pete left Sandy for Eastern League powerhouse, Balwyn before joining the Blues in 2012.
Pete has been a consistent vote catcher in our best and fairest taking the award in 2012 and 2014 and been a top 3 finisher on 2 other occasions.
We congratulate Pete on a great achievement and a great career and hopefully son, Max will following in his father footsteps in years to come.

University Blues would also like to congratulate the following players on achieving significant milestones earlier in 2017
Riley McMahon – 100 Games
Matthew Hart, Will Blakey, Andy and Dan Batarilo, James Carr and Nick Buttolph for all reaching 50 games.