After a very up and down season in 2018, Blues finished the season on a high when Ayce Cordy took out the 2018 Woodrow Medal for the Best and Fairest player in the VAFA Premier Division. Ayce has been a great ambassador for the club and the VAFA in 2018 and his performance caps off a great first year for the former Melbourne Uni student. 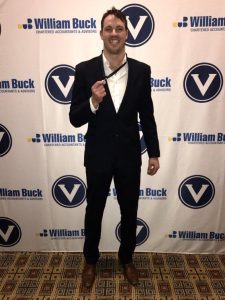 Ayce was an obvious unknown to the umpires early in the season and it took until Round 8, to poll his first votes. 3 votes for best on ground performance against St Bede’s Mentone. He followed up with further 3 vote performances in round 10 (Old Brighton) and round 11 (De La Salle) to be 9 votes, 6 votes behind the leader, Mitch Brown from St Kevins.
Between rounds 13 and 15, he polled 8 of a possible 9 votes to take the lead on 17 vote, by one from Anthony Scott of Old Trinity.
In the last three rounds he polled another 6 votes for 2 best on ground performances against St Bedes and Old Scotch to run away with the Woodrow by 4 votes from Anthony Scott (Old Trinity) with Viv Minchie (Collegians) 2 votes further back in third.
Congratulations Ayce… a fantastic first year at the club.