It is with great sadness and much respect that Uni Blues Football Club announce the passing of Tony McInerney following a lengthy illness. Tony was one of the all-time great people with a deep commitment to character, mateship, community and family.

Tony grew up in Mildura and came to Melbourne in the 1960s as a resident at Newman College to study Law at Melbourne University. 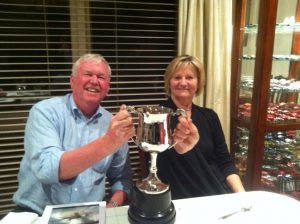 By his own admissions, he never saw himself as a great footballer, but in reality he was a promising junior with Mildura Imperials and was awarded a “Blue” for Melbourne University back when intervarsity football was a much bigger deal than it is today. He played amateur footy for the now defunct St Pats side, but in recent year he came to wish he had played at Blues. For an “average player”, he was a key member of premierships at Sale, Swan Hill and Newman College.

Tony arrived as a regular at Blues in the 1990s when his son, Chris, befriended a number of the Blues of the time and Tony became a regular at training and games. He was adept at most game day roles from Goal Umpiring to the Team Manager Role. He was also seen working the barbeque for the players, so much so that a number of the players of the time referred to him simply as “Sausages”, but to a lot of the current group he was simply “Uncle Tone”.

No job was too big for Tony, nor was it too small and he was always one of the first to welcome new players, coaches and volunteers to the club. He loved the club and enjoyed the company and camaraderie that a Football Club offers.

In 2001, Tony answered the call from the club and assumed the role of President of the Blues. He performed the role for 2 years and took on the role with his usual gusto and confidence and set about with 3 main aims.

One; to establish the annual fundraising Ball, which has become the cornerstone of the annual social calendar and has raised in excess of $500,000 since its inception.

Two; to establish a regular Thursday evening post training meal for the players. When this was started it was a rarity among football clubs, but Tony saw the benefits of player bonding and keeping the players together in a “safe” environment. Even in recent times, during Tony’s illness his Thursday cohort continue to serve the playing group on Thursday evenings.

Three; to establish a Uni Blues Foundation. A financial organ which can generate an ongoing revenue stream for the club. The Foundation is part of the overall Melbourne University Sports foundation and continues to this day.

In 2011, Tony again stepped up as president and set about bringing the club together during a time of much change. A lot of the work undertaken by Tony culminated in the 2014 season when the club won senior and reserve premierships in B Grade. Tony was awarded life membership in 2006 and in 2016 was awarded a Certificate of Merit from the VAFA.

It’s a fitting tribute to Tony that the last Uni Blues game he saw was the 2019 Premiership. A lovely and fitting way to wind up a great contribution to the club.

Tony was a great man, always giving to the club, but also a great family man.  He is survived by his wife Zofia; sons Chris and Michael and daughter Suzie and many grandchildren who were the centre of his later life.

He will be greatly missed and leaves behind a huge hole which the club needs to fill, but also leaves behind a remarkable legacy which can never be forgotten or underestimated.

Under the current COVID restrictions, there is an air of uncertainty around funeral attendees and details will be circulated when available. The club is planning a meaningful and appropriate tribute when we are able to congregate in appropriate numbers.

Blues and the AFL Grand Final